Dive Works was privileged to be called upon to engage in the sensitive search and recovery process of the Cessna 172 light aircraft mentioned in the following story, originally published in The Mercury on 30 December 2014:

An aerial search has resumed for a light plane that crashed off Tasmania’s rugged south-east coast, sparking a mayday call from a Sydney to Hobart yacht race competitor.

The single-engine Cessna 172 was carrying a 29-year-old pilot and a 61-year-old passenger who was capturing footage of the race boats when it ditched near Cape Raoul about 6.20pm yesterday.

“Mayday, mayday, mayday … we’ve a plane in the water,” came the radio call from cruiser Mistraal as she rounded the Tasman Peninsula bound for the finish line.

Crew on board the boat saw the plane go down and its tail disappear beneath the waves, the ABC reported.

Up to nine race yachts diverted to help search for the plane and were joined by specialist police launches throughout the night.

An oil slick had been found in the area but there was no sign of the aircraft or the two people who were aboard, police said.

Two helicopters suspended an aerial search overnight but resumed scoping the crash zone this morning, along with the PV Van Diemen and other vessels on the water.

Sonar equipment is also being used to try to find the Cessna in a search mission being co-ordinated by the Australian Maritime Safety Authority.

Airlines of Tasmania managing director Shannon Wells said he was notified by AMSA that an aircraft had ditched into the water near Port Arthur.

“We are working with all relevant authorities and providing as much assistance as we can to the Tasmania Police,” Mr Wells said.

“At this time, our thoughts are with the families of the persons on board.”

At the time of the crash, the area experienced westerly winds gusting up to 32 km/h. The search has been hampered by rain since the crash, with 4mm falling in the area.

Cruising Yacht Club of Australia Commodore John Cameron last night said two Tasmanian entries — Mistraal and Helsal III — as well as Enchantress, Kraken, Inner Circle, Love and War, and Wax Lyrical were in the Storm Bay area at the time of the incident.

Photographer Richard Bennett, who has photographed Sydney to Hobart yachts for many years from fixed-wing aircraft, said he was very concerned to hear of the crash.

There has been increased air traffic in recent days around the Tasman Peninsula to monitor the progress of race yachts as they make their final turn toward the Hobart finish line. 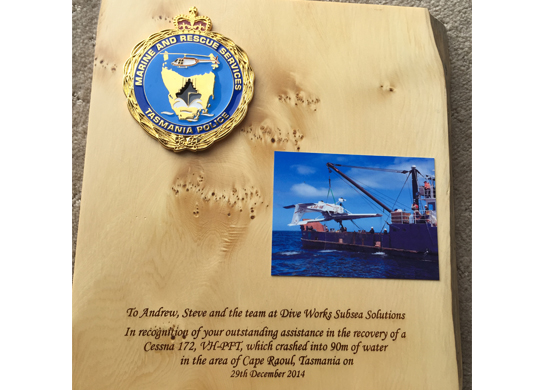